The House That Jane Built – A Story About Jane Addams

Thomas and I were incredibly moved reading about an 1889 settlement home that Jane Addams founded in a run-down Chicago neighborhood, Hull House.

It was a place were people could find food, work, and community and included a playground, kindergarten, and a public bath. By 1907, Hull House included thirteen buildings and by the early 1920s, more than nine thousand people visited each week.

There’s much more to know about Addams; yet this book was specifically about Hull House. She spoke out against war and was a peace activist. She co-founded the Woman’s Peace Party.

The FBI kept a file on her, and she was called “the most dangerous woman in America.” In 1931, she became the first American woman to win the Nobel Peace Prize. She was a founding member of the NAACP and ACLU. 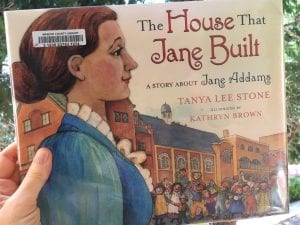