After I stopped laughing, I explained. I know many households still use them and I told her that. Yet, we haven’t had a land line since about 2007. 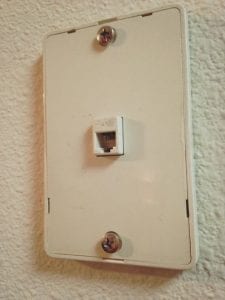 We’ve not had a television since about 2008 and several years ago there was a special running that caused it to be cheaper for internet if you got the cable/internet package. I said, “Sign me up! But, no need for an appointment for the cable, cause I don’t have a TV!” So funny!

So how do we have movie night once a week? The movies come from the library, every once in a while from Amazon on demand, and I play them on a portable DVD player connected to a projector.

Then I project it onto the wall … It’s huge!! Like being at a theater in the comfort of your own home! HA!

I also have one of those little tiny speakers connected to the DVD player so we can actually hear it! We have interesting looking walls in the living room. Things hanging on every wall, except the biggest wall …. Can’t mess up the screen area! xoxo