Beautiful and colorfully illustrated book about Tie Sing. A Chinese American who lived during a time of terrible discrimination against ethnic Chinese in the United States. In 1882 Congress passed the Chinese Exclusion Act, which prohibited Chinese people from entering the country. The act also declared that Chinese-born people already in the United States would never be allowed to become citizens.

Tie Sing hiked the mountains with mapmakers, whipping up gourmet meals for them. His reputation grew and became known as the best trail cook in California. Sing cooked for the thirty men that Stephen Mather took on a days long hike to convince them that national parks needed to be protected. This was the beginning of the National Park Service.

Great book! We loved learning about this time in history and about Tie Sing.

“Long may you build the paths through the mountains.” ~Tie Sing, July 1915 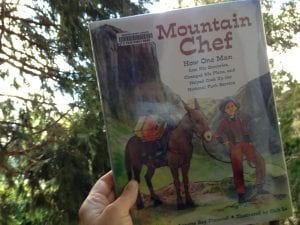