Working on Lillian’s debut book, “Where Would You Fly and Other Magical Stories” ….

Thought I’d share one of the stories to be included (this one hasn’t been edited yet). It’s one of my favorites!: 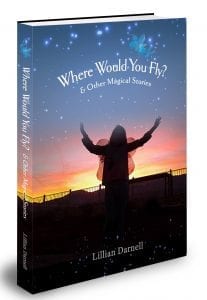 It all started on a warm summer night in a cozy home where a girl lay sleeping until she felt a jolt and she realized she wasn’t in her home anymore. She thought, “Why is there nothing?” and she got her answer. A echoing voice said,”You are where the universe began. It’s up to you to make the planets including Earth. Once you’ve made Earth, start creating. Have fun!”

So the girl quickly discovered she could use her mind and creativity to make everything. First she designed Earth to look sparkly, clean, and rainbow colored. Second, she made other planets look like the colors of the rainbow. She went into Earth and saw she needed to make the moon and stars. So she made the moon look and taste like cheese. She made stars look like glitter.

She made the sky look indigo when it was daytime. She exited Earth to put the blue colored sun near Earth. She went entered Earth again and realized she needed to plant some plants. Luckily, she had some seeds in her pocket. She planted them. She added orange water to Earth to help the plant. She also needed rain. So she made red rain by circling her hand. She made green clouds too.

She realized she was lonely so she added animals of different colors. She created yellow grass so she could rest. Soon the animals became bored with just the little girl. The animals spoke to the girl about being lonely. She said, “No problem. I can make humans but first, I need to set aside some land for roads, buildings, homes, shops, stores and more.”

As she spoke, she created all the other things humans needed. After that, she formed the first 2 people. She also casted a spell to make a child and make it grow. The humans were magenta. The animals were amazed at how quickly the humans formed and adapted.

She thought she was done but the voice spoke to her saying that she would have to use creativity, quick thinking, and more. So she tried casting a spell to make the years speed by but it didn’t go as planned.

She made a makeshift bed and tried to get into her cozy home. That didn’t work so she tried to get the the people and animals to help her. They saw a note on the palm tree. The girl was able to reach it. She realized it was a riddle. She realized all she had do was fall asleep.

Before she fell asleep, she cast one final spell and it was the days of the week, months, and years. She fell asleep after that. There was a surprising jolt and she woke up. She was happy to find herself back in her bedroom. She couldn’t help thinking was it all a dream. Just then, a friendly voice explained that it wasn’t a dream. It was morning.

She went to the kitchen to tell her parents the most amazing thing happened to her. Her parents explained to her she had a real vision. Years later, she grew up to become a beloved author. Her name was Morgana and she had been 11 when the amazing thing happened. She lived in Australia at the time. She loved the book Anne of Green Gables. She thought it described her life perfectly.