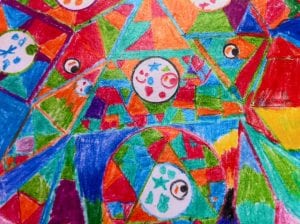 Ever wonder why we sometimes see double rainbows? … from the book, “Where Would You Fly”, by Lillian Darnell … I’m having fun editing. xoxo

This story is about rainbows and love. I hope you enjoy!

Once there lived two rainbows who didn’t want to separate for the love of nature. Their names were Candy Rainbow and Princess Rainbow. One day, Candy Rainbow was accidentally separated from Princess. What they didn’t know was the Nature fairy had split them in half.

His plan was to use his magic and power to get Princess out of the invisible world. So when Princess saw he was stretching out to use his power, she decided to reach over and touch his stretched arc. Candy felt lighter somehow but he didn’t know how.

Princess thought if people saw them, it would be easier to have one rainbow be invisible. Princess decided to go invisible but Candy was able to see her. Every once in awhile, Princess appeared behind Candy. That is why some people see double or triple rainbows.

(written when Lillian was 14 years old)

Would you like to help us in our goal of pre-selling 50 books? Go here …