Walking to School – A Story from Northern Ireland

A book inspired by happenings in Belfast, Northern Ireland’s major city, in the early to mid 2000’s. The conflict between Catholics and Protestants in Northern Ireland is centuries old.

A peace accord was agreed to in June of 2007. This is a fictional tale of what some children were experiencing during that time. 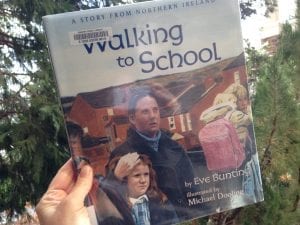