The past few weeks I’ve been reading to Thomas a little gem of a book I came across back in the late 1990’s. It’s called “I Dare You!” written in 1953. Last week we read the chapter titled, “I Dare You to Think Creatively”.

The author shared a few stories of people who were able to interpret the usual in an unusual way and invented amazing and useful things. Like Doctor Ernest Sachs who discovered a way to operate on inoperable brain tumors and the person who changed the telephone to a device that could be heard across a continent.

Thomas stopped me and said he has so many ideas to invent things but he doesn’t know how to make them. I told him that he doesn’t need to focus on the how. Suggested he write all of his ideas in a notebook or a file on the computer.

Every once in a while, go back and read through them. Put his attention on them and then make it his intent to invent whatever it is. Then, the “how” will come to him as well as any other people needed for the how. Told him if he keeps jotting his ideas down in a year or two or five he’ll have one heck of a book of ideas!

It’s a quick read if you wanna check it out. You could read it in one sitting. We are reading a few pages every night. 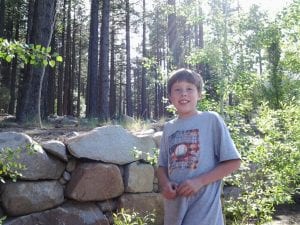