Thomas says: “Good and it’s weird how they used to think the graphics were awesome.”

I say, “I’m not a fan of movies with violence so had put this off until Thomas and Lillian were older. Yet, this movie was huge for me as my best friend Lillie and I watched it over and over and over.

We had lines and scenes memorized. We joined the fan club. It was adhesive in our friendship bond. I didn’t go past Return of the Jedi, but Lillie stayed with it!!! She’s a hard core fan!!

I do get something out of the movie that I didn’t at that time. The Force has an entirely different meaning for me now.” 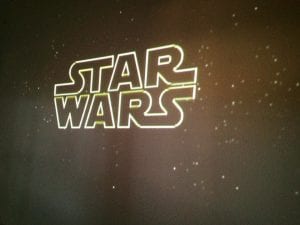